The crucial role of protein phosphorylation

Protein phosphorylation is an impo­rtant cellular regulatory mechanism as many enzymes and receptors are activated/deactivated by phosphorylation and dephosphorylation events, by means of kinases and phosph­atases. In particular, the protein kinases are responsible for cellular transduction signaling and their hyperactivity, malfunction or overexpression can be found in several diseases, mostly tumors.

Therefore, it is evident that the use of kinase inhibitors can be valuable for the treatment of cancer. In this review, we discuss the mechanism of action of phosphorylation, with particular attention to the importance of phosphorylation under physiological and pathological conditions. We also discuss the possibility of using kinase inhibitors in the treatment of tumors.

Protein phosphorylation is one of the most common and important post-translational modifications (PTMs). This reversible mechanism occurs through protein kinases and consists of the addition of a phosphate group (PO4) to the polar group R of various amino acids.

Consequently, this addition modifies the protein from hydrophobic apolar to hydrophilic polar, allowing the protein to change conformation when interacting with other molecules. A phosphorylated amino acid can bind molecules able to interact with other proteins and consequently assemble and detach proteic complexes. 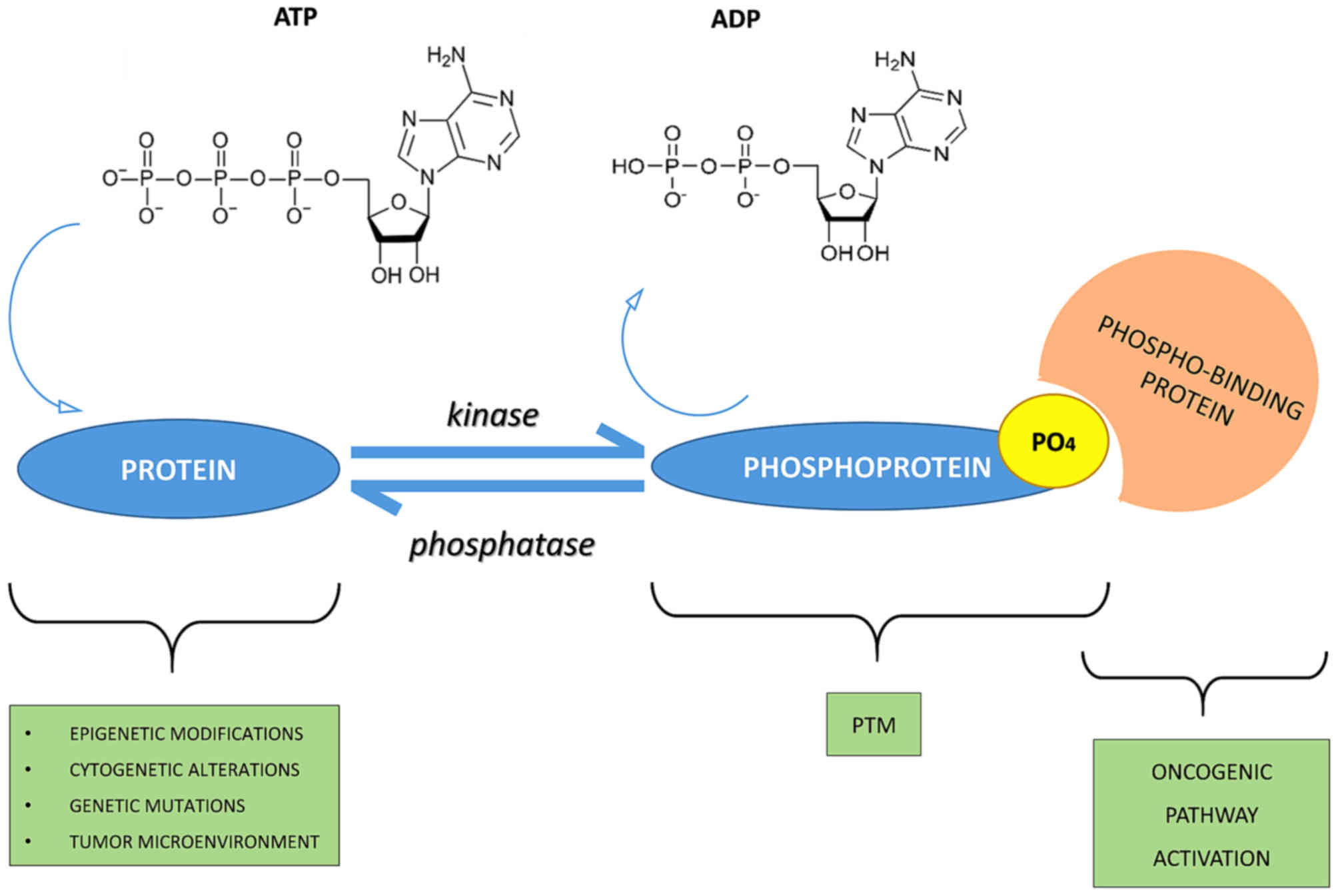 The interactive capacity of the phosphate group is mainly due to its components. One of its main elements is phosphorus. It has five outer electrons able to form a maximum of five covalent bonds, has three pKas, high water solubility and it can form, for its versatility, mono, di and trialkyl and aryl esters with hydroxyl groups, but also acid anhydrides.

In particular, many cellular phosphate esters are phosphoproteins that form, via a catalytic enzyme and adenosine triphosphate (ATP), a phosphate anhydride, acting as a donor of a phosphate group.

Tyrosine phosphorylation is relatively rare compared to the other PTMs and is typical of the epidermal growth factor receptor (EGFR) family, which owns a domain called, precisely, tyrosine kinase. Sometimes, phosphorylation of histidine (His or H) and aspartate residues (Asp or D) (N-phosphorylation) also occurs, but, in both cases, this phosphorylation is less stable than others.